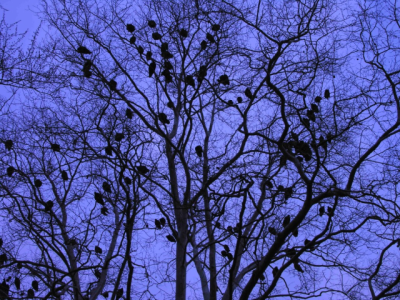 Does it strike you as odd that in the middle of a suburban neighborhood there would be a Holiday Inn for vultures?

It’s not a building, but a large sycamore tree. Every evening as the sun goes down, a flock of vultures arrives, each one wheeling out of the sky on enormous black scalloped wings to land on the high branches.

It takes them a while to settle down for the night. As soon as one lands, another will take off and soar around for a while before coming in for a landing again.

Why do they touch down and then fly off like this over and over? Are they unhappy with their branch mates? Are they trying to decide if they are tired enough to go to bed? Is this some kind of ritual that helps them get comfortable, the way cats turn around on the chair before taking a nap?

Often, several will land on a neighboring pine tree.  Are these the teenagers trying to stay up late? “How about a little privacy, please?”

Occasionally, one will land on a  rooftop and do the vulture walk. Bobbing along like a zombie pigeon, there is nothing clumsier than a vulture on two feet. But when that same bird takes to the air, there is nothing more graceful.

As they flap their wings and cluck back and forth, high in their treetop, I have the impression of ongoing conversations. “Was that the best road kill ever?” “Move over – I’m falling off the branch” “Shut up and go to sleep”

Finally, the light is nearly gone and everyone has found a proper perch. Wings are folded, heads are tucked under wings, and the flock is settled in for the night. IMy friend, the Advocate for Unpopular Animals, identified them as turkey vultures. Unlike other raptor species, vultures are sociable, which explains why they gather for these large slumber parties.

But it’s still curious that they have chosen this particular tree. Out of all the other trees in the area, what makes this one their favorite? I hope it’s not because they are waiting for one of the elderly residents to keel over and become food. I would like to think that they enjoy the presence of people down below, the occasional car passing by and the glimmer of street lights.

More likely, they just got a deal with their frequent flyer miles.