The Temple of Fine Dining 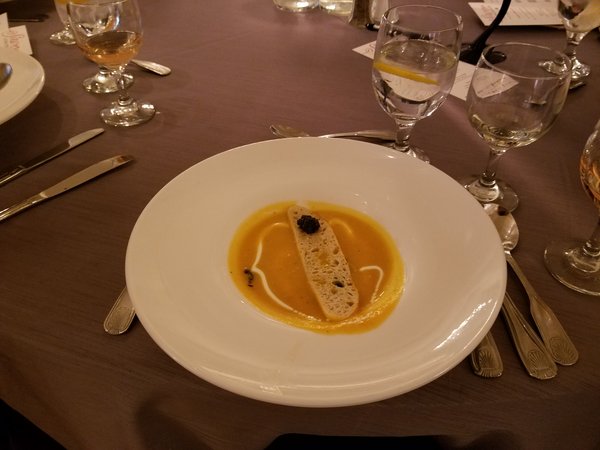 This all started with a coupon. A restaurant coupon for $50.

In the past, my dining adventures have been limited to Mexican restaurants in strip shopping centers. And as a child, eating out was a a trip to McDonald's once a year.

I have no experience with fine dining. But.... the coupon was for my birthday, so why not give it a try.

My daughter was all on board with this, so off we went, dressed in our best, to the Fancy Restaurant .....

After letting the valet park our car we entered the dimly lit sanctuary, where we were lead past a wall of chilled wine bottles to our reserved seats. I felt small and poorly prepared. Should I have studied up on the subject? It looked way more complicated than I had assumed.

A man in a uniform jacket showed up at our table. That was already intimidating, but he also had an accent - vaguely eastern European. He brandished menus and began a long prayer (I mean description) of the various dishes this restaurant offered. There was something very important about "dry aging" the beef, which came in varieties such as "porterhouse", "NY strip", and "filet mignon". I pretended to comprehend, as the realization of my utter inadequacies became more and more apparent.

My knowledge of beef was that it came from a male version of a cow. My cooking experience was with the ground variety which didn't seem as connected to an animal.

We acted as if we needed to consult with each other over the menu, and the uniformed man slinked off. OMG, I said, did you see the prices? What is the difference between a porterhouse and a NY strip and a filet mignon?

She didn't know either, having grown up on hamburgers and tacos.

We decided they must all be about the same because they were all seriously EXPENSIVE. I kept thinking how much ground beef I could buy for a single entree, but hey, we had a coupon!

The man in uniform showed up again, this time with an i-pad that displayed the cocktail menu. I considered ordering one but 1 - they were EXPENSIVE, 2 - they were made with things like tequila and vodka - yuck! and 3 - a single sip would mush up my brain so much that I would probably order something even more EXPENSIVE.

Fighting a huge up-welling of inadequacy and humiliation, I asked if we could split the "dry aged NY strip" entree. And, no, we didn't need a side dish, since we had already ordered the fried calamari appetizer, and there was a basket of fancy bread, too, and a giant slab of butter.

Was the uniformed man ok with our order? What was his position anyway? Who were these other people in white aprons filling up our water glasses?

I felt as if I was in a temple to the cult of Fine Dining, with various priests and functionaries dressed in their religious garments. The table was an altar, with all the items set about just so, forks and glasses and plates, all upon a pure white cloth.

The two of us had entered this establishment to participate in the "service". A third functionary arrived, a woman in a brown uniform. She carried two pure white plates, with a little chunk of brown meat upon each. This must be the $45 "dry aged NY strip", since I had no idea what to expect, maybe something with a large bone?

It felt like this was a sort of ceremony. Since were were preparing to eat the body of an animal that was killed for this purpose, maybe it was proper that there should be a religious element to this event.

But this cult was focused on the preparation of the food, not the source. All the credit was being given to the process of "dry aging" and grilling, and not a single word was mentioned about the real source, the poor animal who had munched grass and flicked flies sometime in the past.

It was as if the raw material for this magical act of preparation had just come out of nowhere.

We nibbled our meat, which tasted like meat. It was tender. We were both puzzled about why this was so appallingly expensive. We were looking forward to getting out of this place.

But not so fast - since it was my birthday, our man in uniform came back with two thin fluted glasses of champagne with a large red raspberry in each one. Then another plate arrived, with two little round dessert objects and the words "Happy Birthday" written in chocolate in the middle.

This was just lovely, and quite unexpected, so we took photos before we got around to eating them.

Then, the ceremony was over and it was time to pass the plate and take up the offering, which in our case was the coupon and my comforting green American Express card.

The priest whisked off our contribution and we waited while the magical numbers were calculated. Kept wondering how far our $50 coupon would go. When he returned, we were relieved that our coupon had done it's own magic, and the American Express did the rest.

There were no hymns to usher us out of the temple, but the valet ran out into the parking lot and retrieved our car so that we could return to the real world.

All the way home we talked about the weirdness of "fine dining". Perhaps if we had been familiar with the way the ceremony worked, we wouldn't have been so intimidated. After all, lots of people do this all the time and seem to love it.

But to us, it was as if everyone we encountered could see a glowing neon sign on our heads that said "this person is clueless". The order of service, the prayer and the liturgy were completely unfamiliar. We were like Buddhists at an Episcopal church service for the first time.

Nothing made any sense. How did the process of eating food take on the trappings of a religious cult?