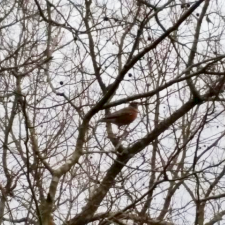 What's red and black and berserk all over?

A few days ago, there were several hundred of them in my yard, fat and furious, gobbling up purple hackberries and randomly flitting about. They obviously really like the hackberries, but there was more than just a free dinner. They appeared to be getting drunk.

Did the hackberries ferment in their stomachs?

I found a story from 1959 about a similar invasion of hackberry-crazed robins in the suburbs of Nashville:

The robins spent a good part of their time in these trees, swallowing the berries and then dropping to the lawns where they would bask in the sunlight or run aimlessly about while their digestive tracts drew nourishment from their meal (Albert F. Ganxer from 'The Migrant')

To learn more, Albert 'procured' two of them and cut them open. In one he found 35 hackberries in the intestines and more in the gizzard and stomach. However, he failed to explain why they were acting so inebriated.

There are all sorts of accounts of people who have found what appear to be drunk birds in the vicinity of various berries. In fact, I just wasted an amazing amount of time looking some of these up.

But when I finally pulled myself away from all those fun stories, I was left with the thought that the way other creatures live is completely different from the way people live. The tree outside my window, that I hardly ever even notice, was free dinner with an open bar for this army of robins.

How they found it is a mystery - did they use bird GPS? Did they see a big neon sign? They didn't have to make reservations or carry credit cards and luggage - they just showed up.

And, unlike people, they didn't have to 'clean up after themselves' either. No garbage. They left lots of droppings and digested seeds, but not 'trash'. No plastic bags or recycling containers were needed. The waste falls to the ground and gets turned into more ground, probably used by an army of even smaller creatures.

As suddenly as they appeared, the army of crazed robins is gone. They left when it was time to go - no need for alarm clocks or packing up or checking out or looking on the map for the next hackberry tree. Everything is 'built-in' - it's us, people, who have to put in so much effort. Maybe the robins aren't so crazy after all.