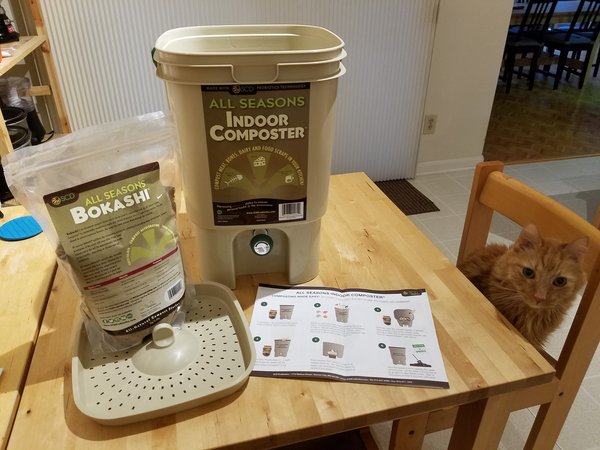 No more DIY bokashi composting - this time I'm going with the official system.

It was either that or give up.   After 2 years of lugging around 5 gallon hardware store buckets full of partially decomposed kitchen garbage, I finally realized I was doing it wrong.   First, my nested buckets had no spigot so draining was a huge nuisance - picking up the inner bucket which weighed a ton, finding a place to set it - really nasty and stinky, and pouring what was in the bottom bucket into the bushes outside.

I should have had a spigot and I should have used smaller buckets.  But my first mistake was not using enough bokashi starter material.

Now that I am using an official kit with instructions, I know to add a lot of starter.   And it works.   The bucket is in my kitchen where it's convenient and believe it or not, it hardly smells at all.    Even the liquid from the spigot is not too putrid and my houseplants seem happy to drink it up.

I you want to know why I am really doing this, it's because it's a kind of religious practice.  During the few weeks between almost giving up on composting and the arrival of the new bucket, I was throwing away my kitchen waste.   Hauling off the coffee grounds, limp old vegetables, banana peels...  They were destined for the landfill.

Somewhere, a voice was asking me - why?   Why is this organic matter being buried in a massive tomb?   Why is it not going back to the earth to make new soil?

I don't know who the voice belongs to.   But I find it hard to ignore.   Sometimes I think the symbol of what is wrong with our world is the trash can.