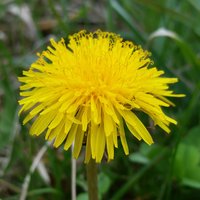 For the holidays, the kids decided to visit old Mother Earth. They hadn't seen her in a while. So Janet, Harriet, John, Peter and Hortense all piled into John's new SUV and headed down the highway.

As they drove up the tree-lined street, they saw Mother Earth in the yard, surrounded by flowers and bees, and to their horror - weeds. The yard was full of weeds!A deer was munching something by the door and squirrels were running up and down the oak tree that shaded the house. When Mom stood up to wave, she looked a little stooped-over.

After a lot of hugs, they all went into the kitchen for tea and cookies. Mom sat in her familiar place at the table, feeding the squirrel in her lap from a bowl of acorns. A small snake poked it's head out of a cabinet and some robins perched on the sofa watching the worm bin.

"Mom, you look tired" said Hortense, pushing a chipmunk away from her cookie. "Is there anything we can do?"

"I know what exactly you need", interrupted John, the oldest and a successful pharmaceutical executive.

"Let's take you in for a checkup and get some tests run - maybe you need some medications."

"Good thinking, John", said Peter who had made a lot of money on real estate. "But I think this place could really use some work. While you are at the clinic, I can cut down that oak tree outside - that's how all the squirrels keep getting in here. And I know a great exterminator who can get rid of all the rest and spray for bugs too."

"No, no", said Janet, who owned a contracting company. "The first thing we need to do is pave over the yard. That would solve the animal problems and the weed problems."

Harriet, a food blogger, piped up - "Have you looked in the fridge? There's nothing in there but acorns, compost pie and topsoil sausages. And what's with the cow patties? I can toss all that and get some chemical fertilizer frozen dinners. Mom shouldn't be drinking rainwater, either - it doesn't have any phosphates."

"I can't believe she doesn't have a TV, said Janet. "How is she going to keep up with what is happening with people? All she hears about is what animals and plants have to say, and they don't know what's really going on."

"That's not what I meant', murmured Mother Earth, looking alarmed, but the kids all started talking about the best medical treatments and the logistics of getting the cement mixer in the neighborhood, brands of fertilizer and how to get wifi in the house.

They all stood up, but Mother Earth stayed put, sipping her tea and petting her squirrel.

They all looked at her.

It was Hortense, who had been quiet so far, who said, "What is it that you need, Mom?"

Mother Earth patted the table and said, "Will you please all sit down for a minute? No one ever listens to a word I say."

"You all have ideas, and I appreciate the thoughts, but they aren't going to work for me. You need to understand me before you can help me. After all, I am 6 billion years old and I have been getting along fine all that time."

"But, Mom, your lifestyle is old fashioned", protested Peter, frowning.

"Wait - let her finish", said Hortense, who wasn't a successful anything, but a good listener.

"I miss is my topsoil and my trees. And especially my grazing animals", said Mother Earth wistfully. There used to be so many of them, munching happily on wild grasses. I loved the way their little hooves felt on my skin, and they created the best topsoil you can imagine. The trees loved them, too.

You probably don't remember, but I had some other children once who understood how the grazing animals and the trees and grasses all worked together.

"But Mom, seriously, you don't mean you want us to drop our whole civilization and become a bunch of hunter gatherer savages!" said Peter indignantly".

I don't know where you kids get your ideas", said Mom. That's not what I meant at all. I'm just sad that you work so hard to undo all the efforts I make to help you. I keep sending weeds to your fields because weeds are like Bandaids. When there is an injury to my skin, the weeds show up to repair the damage. Yet you keep killing them.

"Then, you insist on mowing every square inch of landscape that doesn't have a building on it. What would happen if you stopped doing this? Eventually some trees would start growing.

"And why must you take huge swaths of land to grow a single type of plant. You know as well as I do that this is a terrible idea. If you let the land go back to grass and weeds and trees let some grazing animals loose, that would make me so much happier, and you would be so much healthier. You could be eating them instead of of the sad, droopy things you grow in rows."

"But Mom, surely you don't want us eating animals?!?" - Janet was practically shouting, a look of horror on her face.

"I know you are just trying to do what's best", said Mom. "But I think you are missing the big picture. You are all animals too and just as mortal as they are. I get the feeling you are hoping that if don't eat animals you will not have to deal with death. "

Everyone looked down at this.

"You are too young to realize that you have been around here a long time, and that death is part of the plan, like night and day. You don't mind going to sleep at night, do you? Because you know you will always wake up. When you know this, you will see yourself in the buffalo, the squirrels, the oak tree, even those worms over there." She pointed at the worm bin where the robins were pulling on a long slimy wiggler.

"But Mom", wailed Peter, "Aren't we special? Aren't we better than the animals? Aren't we supposed to be smart?" He looked like he was about to cry.

"Absolutely", said Mom. "That's why I don't really mind when you screw up the environment like you have been doing recently. You are incredibly special. You, of all my children, have the magical ability to reflect on what you experience. You can feel awe and wonder. And, you are amazingly creative - building cathedrals and coffee shops and cruise ships and cell phone towers!Every day one of you comes up with something new and exciting - I absolutely love this refrigerator you bought me on your last visit."

"Just go on being your wonderful special selves, but try and get along with everyone else, too - the dandelions, the worms, the buffalo. And each other. - that's the hardest part. So, even though you appear to be clueless right now, I have great hopes that you will eventually start to get with the program. "

"In the meantime, stop and think before you do any more medicating, mowing, paving, plowing and spraying. Let some weeds into your yards. The buffalo want to come back - find some places for them to roam."

"Now, let's all go outside and I will introduce you to my neighbors, the Dandelions. "

A few hours later, after chatting with the Dandelion family, catching up on what was happening to the Sun, the Moon and the Polar Bears, and a short trip to Computer Jungle to get Mom a new Chromebook, it was time to go. Mom was excited to get online and check out the Gaia network and watch 'Our Planet' on Netflix.

When the SUV finally rolled out of the driveway, with the cooler that Mom had packed full of topsoil and acorns, John, Peter, Harriet, Janet and Hortense all waved out the windows. Mom, standing a bit taller, waved back. "Bye now - have fun and don't wait so long next time!" 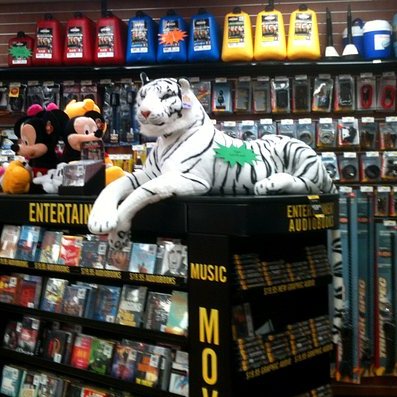 Aren't we getting tired of news about things like politics, war, money and crime? What if there was a news channel where we could learn about the origins of the things we encounter in our everyday lives? Featuring the people responsible for it all. The people who create our clothing and appl... Read More 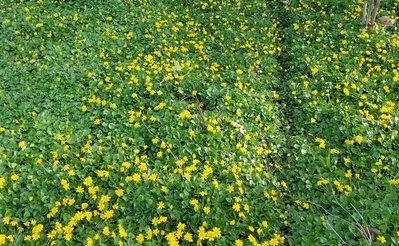 Suddenly, in the early spring, the woods are graced with a carpet of tiny yellow flowers. They are so pretty, but - they are 'invasive' we are told by the native plant police. Like Robbie the Robot, we are encouraged to ex ter min ate. Seriously? I have been collecting the leaves and flowers ... Read More 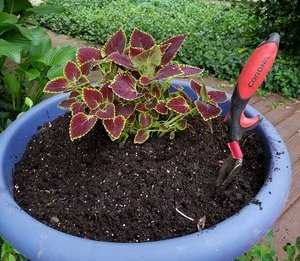 "What?!?  You don't enjoy digging in the dirt?  It's such a satisfying, healthy and noble pursuit! But to tell the truth,  I would much rather be hanging out with my laptop than digging in the dirt. To me, gardening feels artificial.  It's a way of coercing nature into growing what we want where... Read More 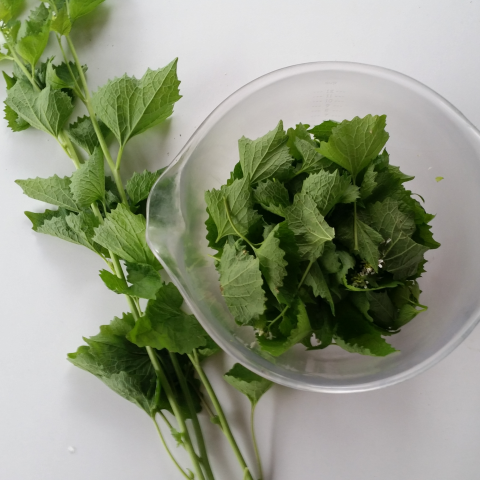 "All good things are wild and free" - Henry David Thoreau Can we change our perception of what a lawn is supposed to be?   Out lawns look like outdoor versions of our livingrooms - a carpet in the middle with shrubs and flowers as furnture and pictures.  What if we changed the livingroom model t... Read More 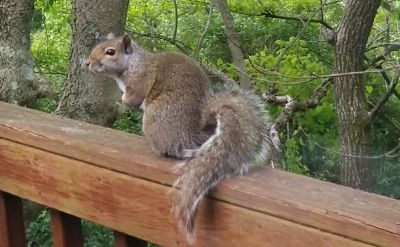 I’ve been watching a squirrel on my deck. He was eating a nut and tossing off the pieces he didn’t want.  He wasn’t concerned with keeping the floor clean. He didn’t go look for a trash can, or bother to sweep and vacuum. Nope — he just tossed it off and went to find another one. M... Read More
→ Next Page